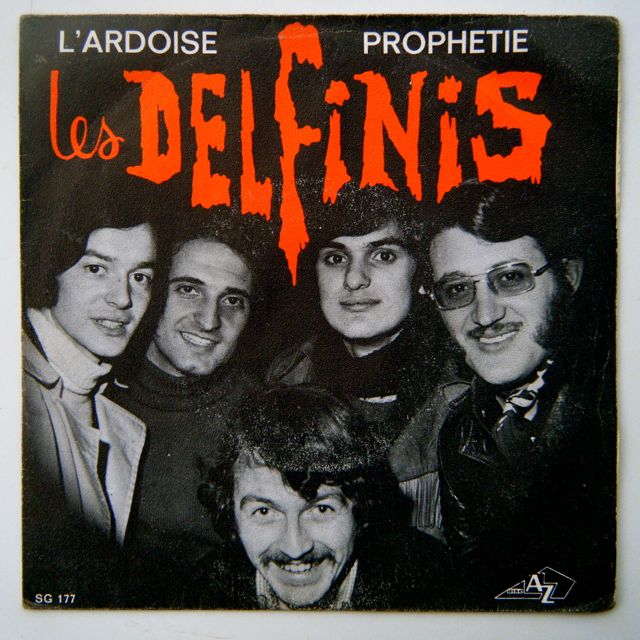 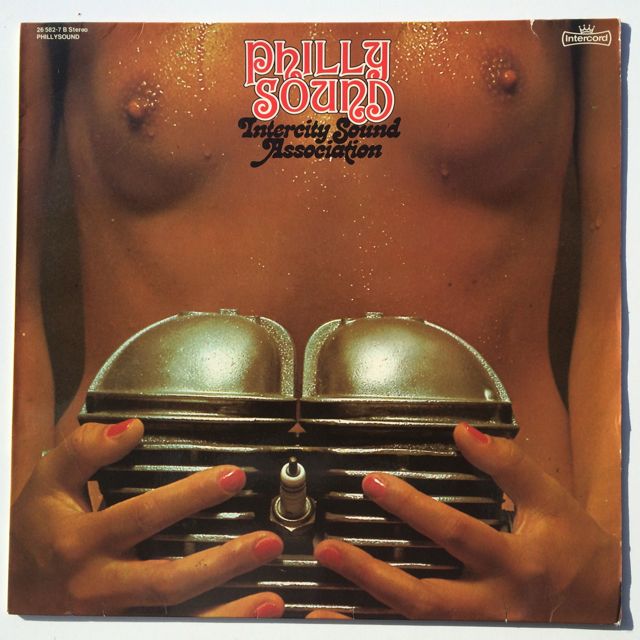 Scarce original German press on Intercord released in 1976.
Outstanding euro funk lp produced and arranged by Klaus R. Nagel from the famous Joy Unlimited and Fritz Muenzer. This album doesn't sound like the disco of Philly, not at all, but rather like the cream of the european library including heavy sound production, fat breaks, fat bass, crispy guitar, cosmic synth, amazing flute work and cinematic string arrangements thoughout the lp, no filler, all killer!!! Check the soundclip!!
This copy is clean and shiny.
The cover shows light wear on the edges and corners, little writings on the back cover. 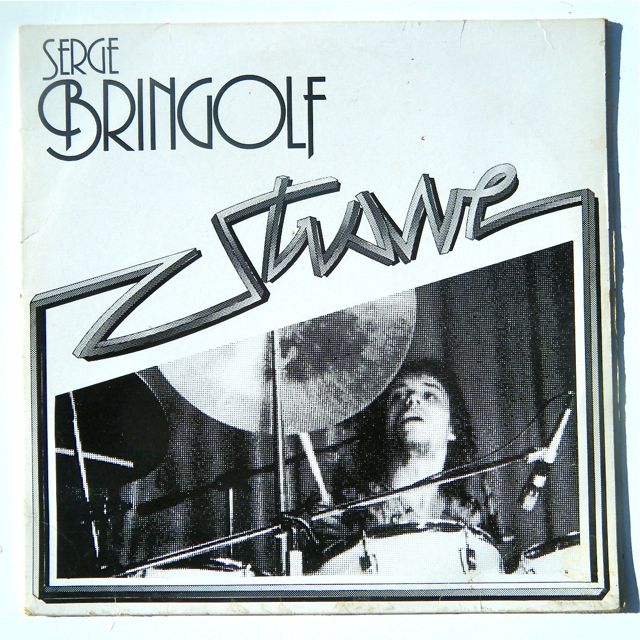 Original French press released in 1980 on the little label, Omega Studio.
Brilliant prog jazz fusion lp composed by the drummer, Serge Bringolf, very interesting lp from start to finish!!! Highly recommanded!!
2 lps set, one record is VG+, the other one is VG, overall, plays fine!!!
Cover has light wear on edges and corners, little sticker on the back cover.
Gatefold sleeve. 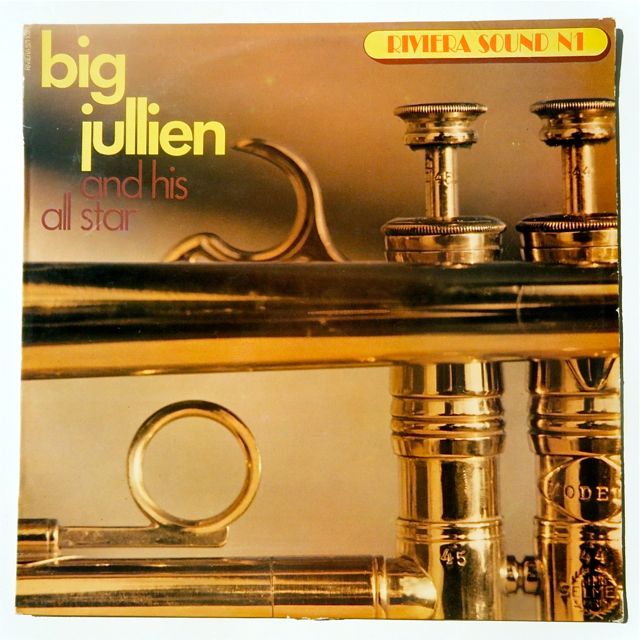 Big Jullien And His All Star - Riviera Sound N° 1 SOLD

Original French press on Riviera.
Euro jazz funk at his best composed by Ivan Jullien and Michel Colombier featuring Eddie Louis, Maurice Vander, Pierre Alain Dahan... Monster album from start to the end, check the soundclip!!
This copy has just some light marks but they don't affect the sound, plays excellent!!!!
Cover shows light wear on corners and one edge, some little stains on the back cover. 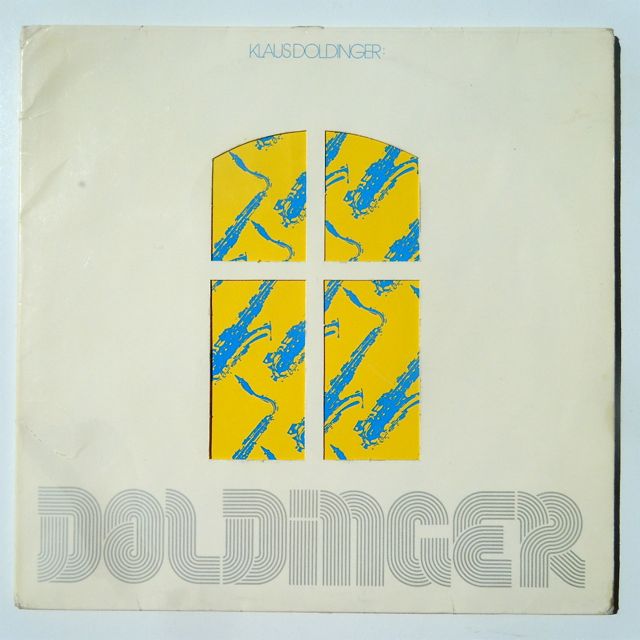 Original German press released in 1973. 2 lps Set.
Killer lp by Doldinger including some monster euro funk tracks like "Sitar Beat", "Back In The Dark", "Slurpin'", "Devil Don't Get Me and more... Listen!!!
Record has several light marks but they don't affect the sound, this copy plays fine!!!
Light general wear on the cover, two little tears on the top and down edge, light laminate wear on front cover. Gatefold Sleeve. Printed inner sleeve in great condition. 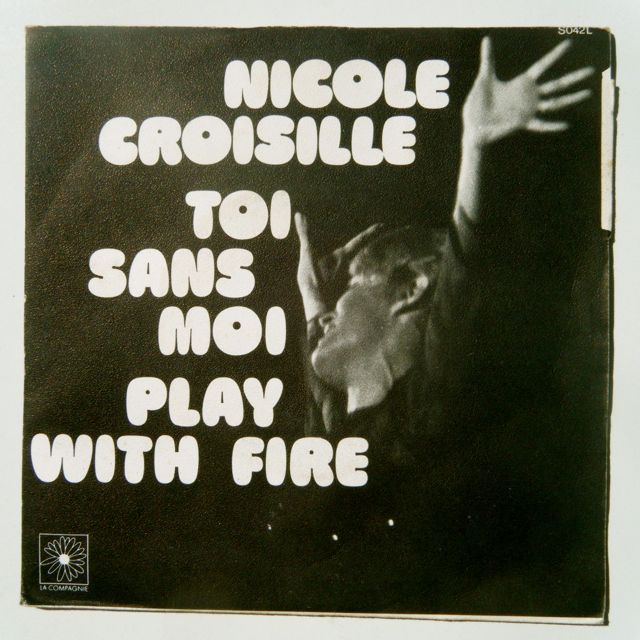 Seldom seen original French 45 including the amazing sister funk, "Play with Fire" well arranged by J. Denjean, check the soundclip.
Record has some light marks, plays fine!!! Light general wear on the cover, little writing on the back cover. 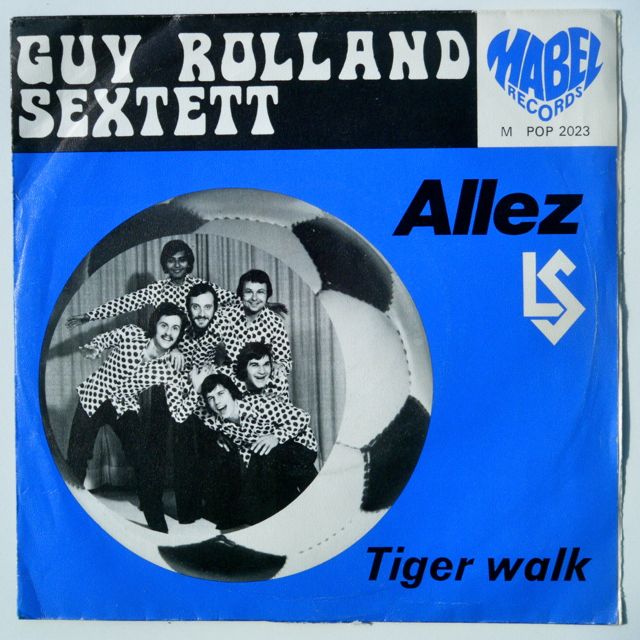 Obscure Swiss only 45 by the Guy Rolland Sextet released to support the local soccer team, however it contains the surprising rare groove track, "Tiger Walk" on the side B.
The record has just some superficial marks, plays excellent!!!
Light wear on the corners and edges of the sleeve. 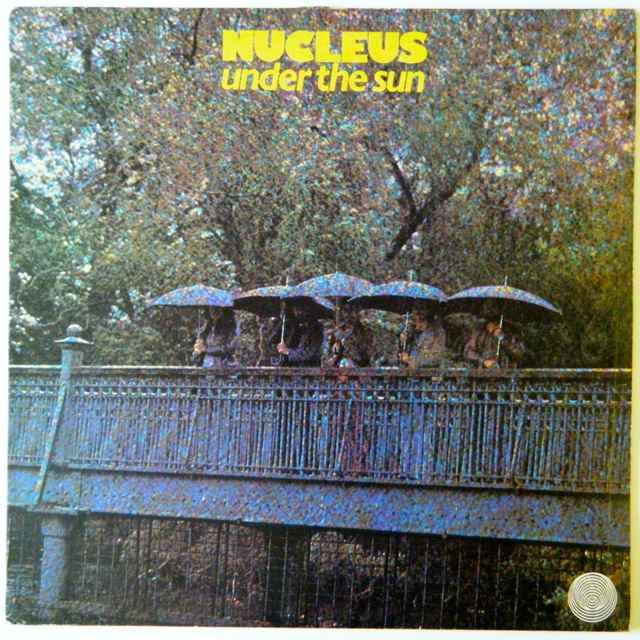 Nucleus - Under The Sun SOLD

Original UK pressing from 1974.
Creative jazz groove fusion lp by the cult UK group Nucleus, lead by the famous trumpeter Ian Carr. Check the soundclip!!!
The record have some light marks on side A but they don't affect the sound. The B side is in excellent condition. The cover shows some light wears on the edges and a little split on one corner. 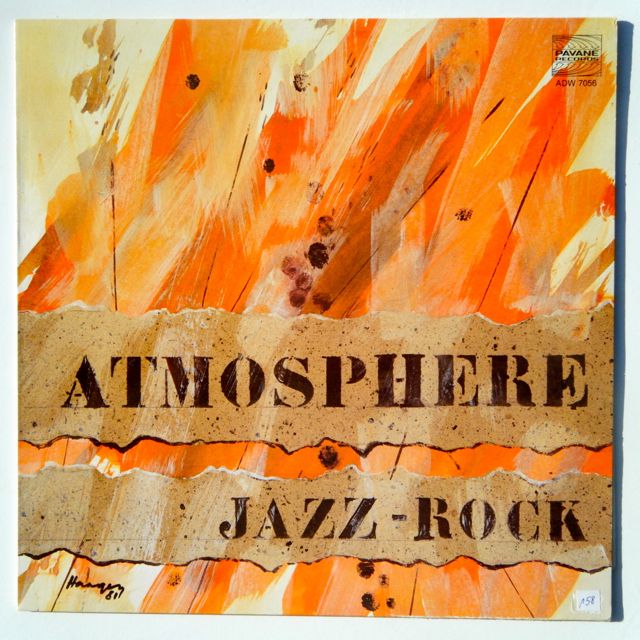 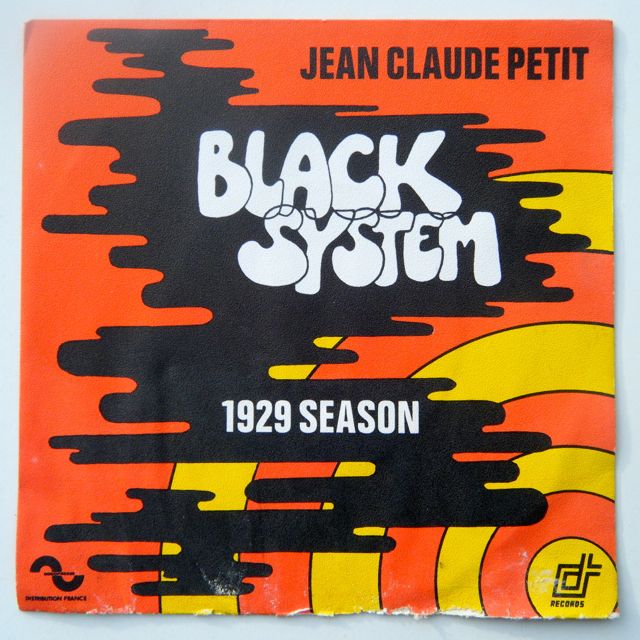 Classic French 45 composed by Jean Claude Petit including the euro funk track, "Black System".
Record has several light marks but plays fine!!
Seam split and tears on the down edge, writing on the back cover. 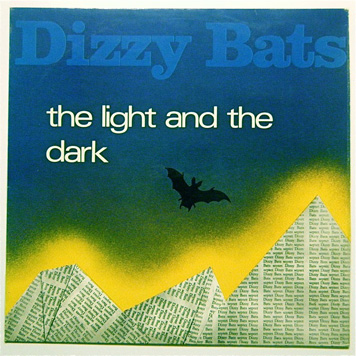 Dizzy Bats - The Light And The Dark SOLD 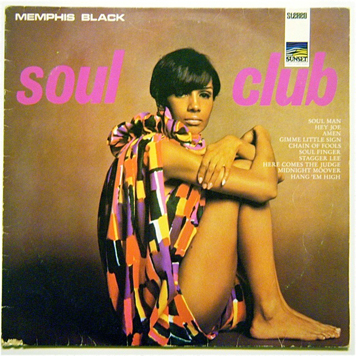 Original German 1st press of this 60's heavy Hammond rare groove lp arranged by Ingfried Hoffmann knows also for his library sessions and his colaboration with Klaus Doldinger.
The record shows hairline marks but they don't affect the sound, it plays fine, check the soundclip. The cover a tear (2cm) on one edge, general wear on the edges and corners.

Very hard to find original French pressing released on Pathé Records.
Michel Berger, known in France for this popular song and his collaboration with France Gall during the late 70's, early 80's, gives in this LP a conceptual project combining the typical French groovy pop with classical music.
On this album, he is helped by l' Ensemble Symphonique de Paris under the direction of Paul Capolongo and a pop group featuring Claude Engel on guitar who worked with Bernard Lubat and on the "More Creative Pop" library, Tonio Rubio on bass known for his "Rhythms" LP on Tele Music and his collaboration with Eddie Warner, Jean-Claude Vannier (L'Enfant Assassin Des Mouches) and last but not least Pierre Alain Dahan (Tele Music Library) on drums. Soundclip from a previous copy, this one plays fine!!!
Record has some superficial marks, shiny copy!
Cover has light wear on the edges and corners, a solid copy!! 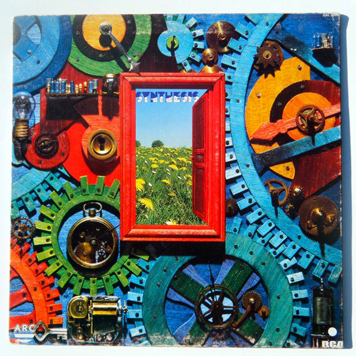 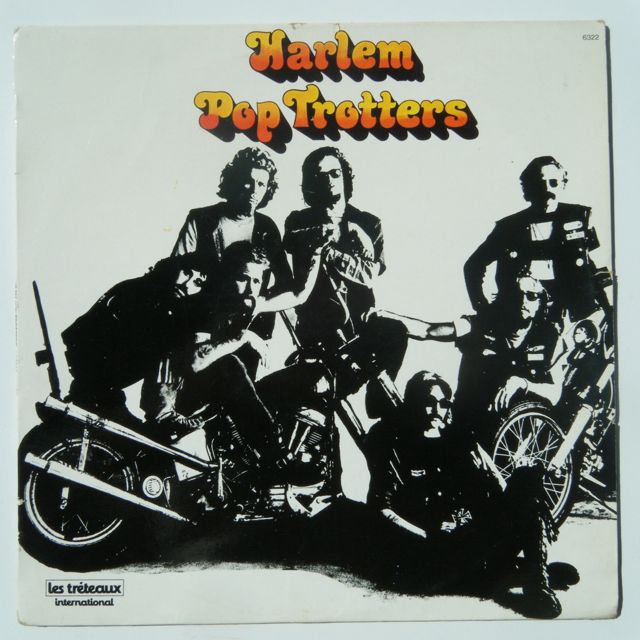 Original French press of this classic euro funk / library lp composed by Pierric, Rolland, Rodi...
Solid lp from start to finish, listen some tracks...
The record have a lot of marks, no deep scuff, you can hear ticks, check the soundclip.
The cover has a long tear on the back cover and wear on the corners and edges. 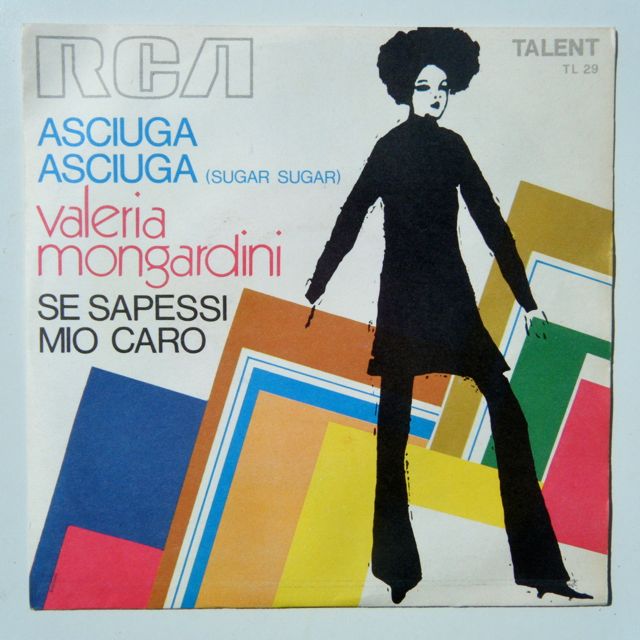 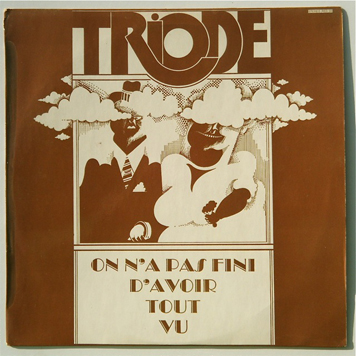 Cult psych funk lp conceived by the flutist, Michel Edelin, released on the famous free stylish Futura label in 1971. No need to introduce this outstanding lp, all tracks are luminous and intense, impregnated by the groove and the psychedelica, listen to the soundclip!!!
This copy has just some superficial marks, a clean and shiny copy, plays excellent!!
The cover shows a laminate wear on the left edge and a light wear on the edges and corners. 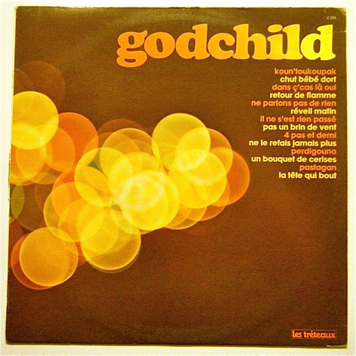 Cult lp in the library / rare groove circle by the ephemeral French band, Godchild under the direction of J. C. Pierric, euro funk at his best throughout the album, we sell the hard to find original press on "les Treteaux".
The record shows some light marks, nothing deep, no scuff, just some light clicks, overall, it plays fine. The cover has tape on three corners and three little seam splits on three edges. 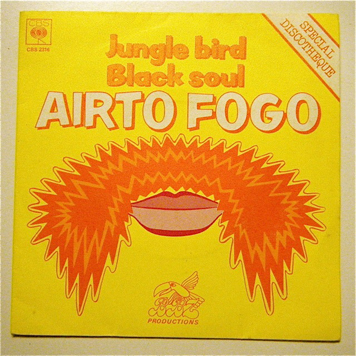 Original French press released in 1974 of this monster jazz funk double sider composed by the infamous Airto Fogo, the both sides aren't in the lp but still in the same vein, check the soundclip, high quality groove here!!!!
This copy plays fine, just some superficial marks, no scuffs!!!
Little tear on one label.
The sleeve is in EX condition, just some minors wears. 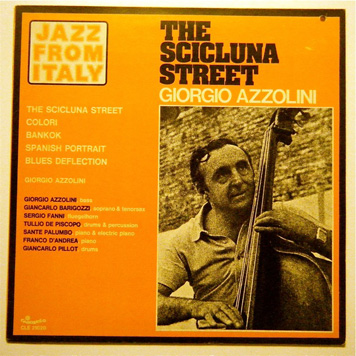