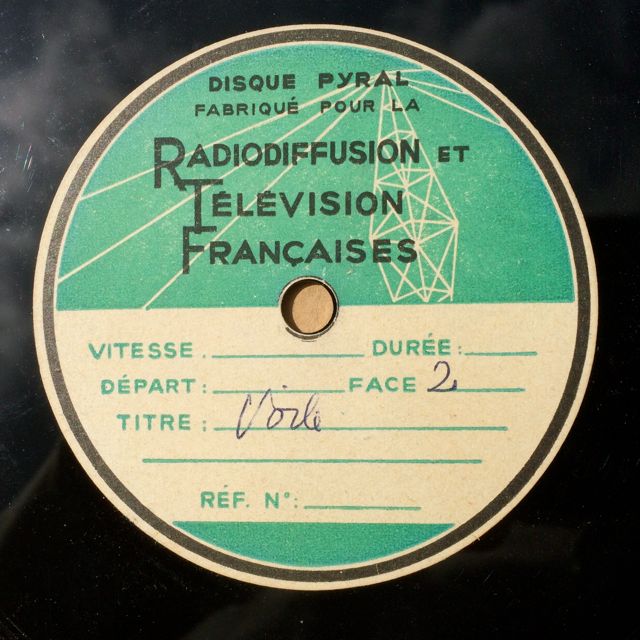 We're proud to offer a nonesuch sound document, two unique acetates 12inch - 78rpm from the early 50's including the Pierre Henry piece, "Le Voile d' Orphée", this is the 16min version, four side of approximately 4min... Which later served as the ending of Béjart-Henry ballet "Orpheus" (1958). These set is impossible to find in any condition, the acetates have marks, a light background noises( like most of acetate) but plays ok.The cover has tears.
Serious offer only. 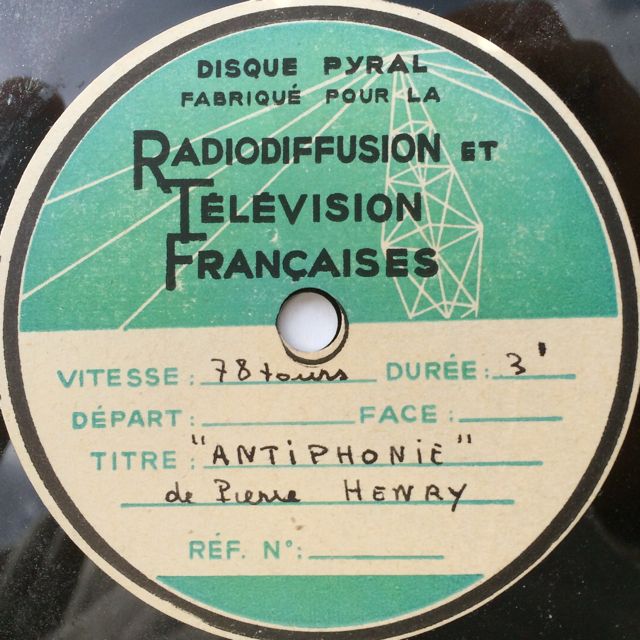 We're proud to offer another unique very early press - acetate 12inch - 78rpm from the early 50's including two famous Pierre Henry pieces, "Antiphonie & Batterie". These tracks was composed in 1951 and released later, in 1957 on Ducretet Thomson. It's an incomparable sound document about the first musique concrete period.
The acetate have marks, a light background noises( like most of acetate) but plays ok.
The cover has tears. Check the picture.
Serious offer only. 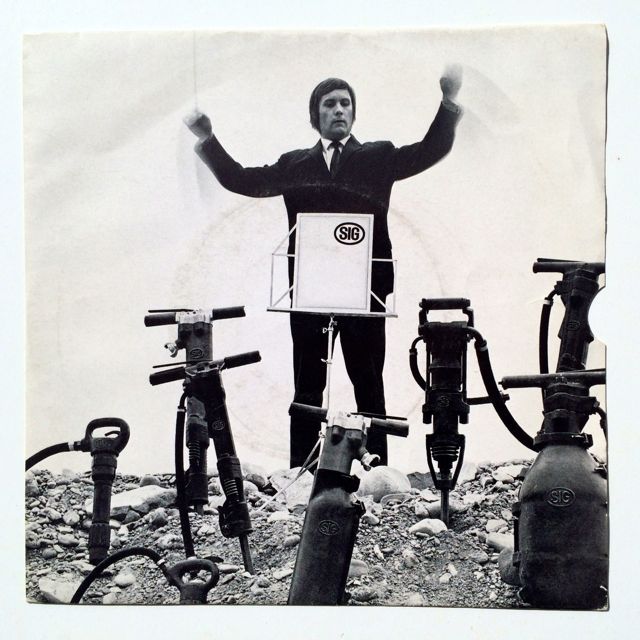 Ultra rare Swiss 45 composed by the famous "electronicien" Bruno Spoerri for the promotion of a local industrial company. Like every Spoerri's project, it's hard to define the sound, it's a kind of easy electronic music accompanied by drums made by jackhammer under space effect!!!! Really surprising and attractive. This is a one sided 45.
The record is shiny with just some superficial marks. There is a ring wear on the front and back cover and a light general wear. 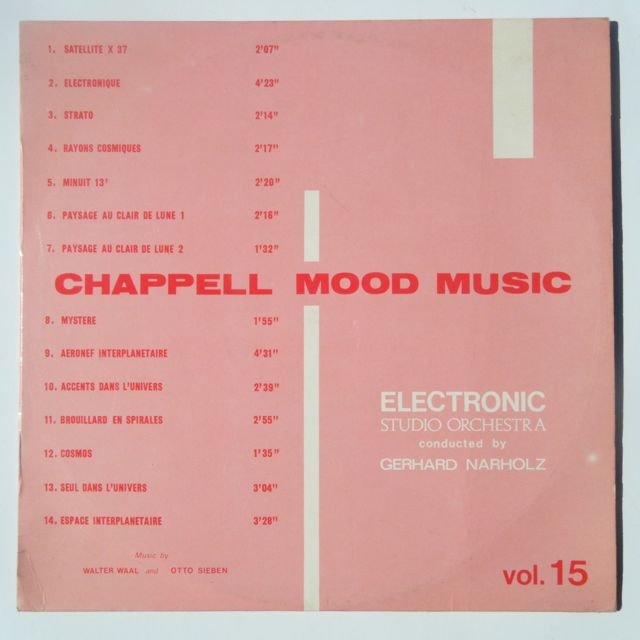 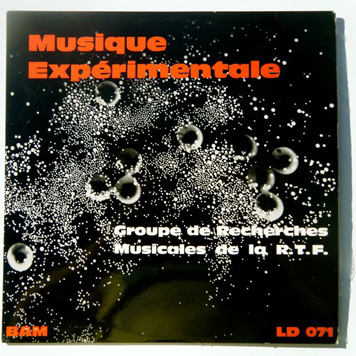 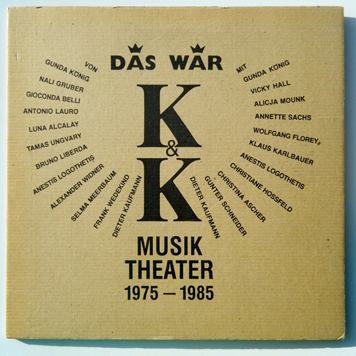 Obscure Austrian avant garde / improv lp privatly pressed by the K & K Experimental Studio. Different works on this weird theater music lp, some esoteric drone attempt, hard free jazz boiling, detunning baroque music performance... Listen to the soundclip to give you an idea.
The record has some hairline marks, you can hear some little ticks, overall, it plays fine.
The cover has tears on the open edge. Gatefold sleeve with some inserts concerning the different performances. 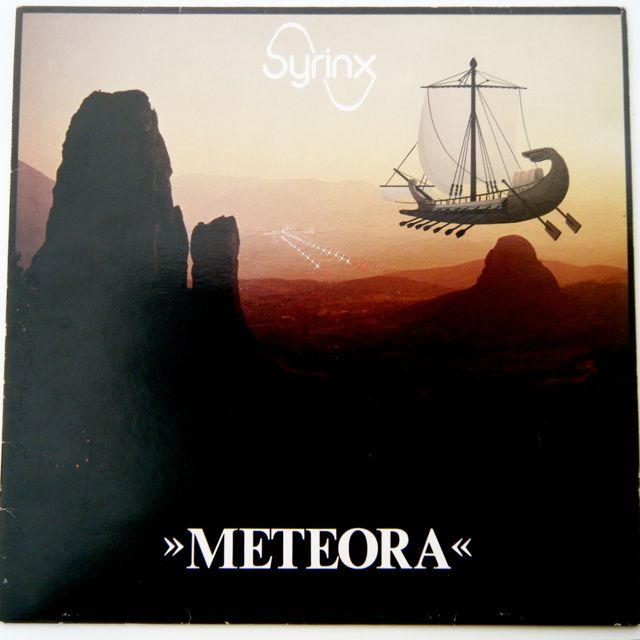 Rare German original press released in 1980.
Sought after kraut electronic / cosmic lp composed by Maximilian Marzinkowski. He plays some cult analog synthesizer like the Arp 2600, Arp Axxe, Arp String Ensemble, Roland Jupiter, vocoder, analog and digital sequenzer, he is helped for this project by Ferdi Manig on violin, Valerie Kolmetz on percussion and Harald Hoffmann on drums.
It contains the amazing proto electro track, "Syringendrom", the trippy "Steingarten" who finish with an insane drum beat / synth part, check also the downbeat with great synth work, "Pinios" and the ambient sound of "Meteora" including beautiful synthesizer texture, great vocoder and violin works!!! Solid lp from the beginning to the end!!!
The record is in NM condition, no marks, shiny and clean copy.
The cover shows some little tears on the back cover and light wear on the edges and corners. 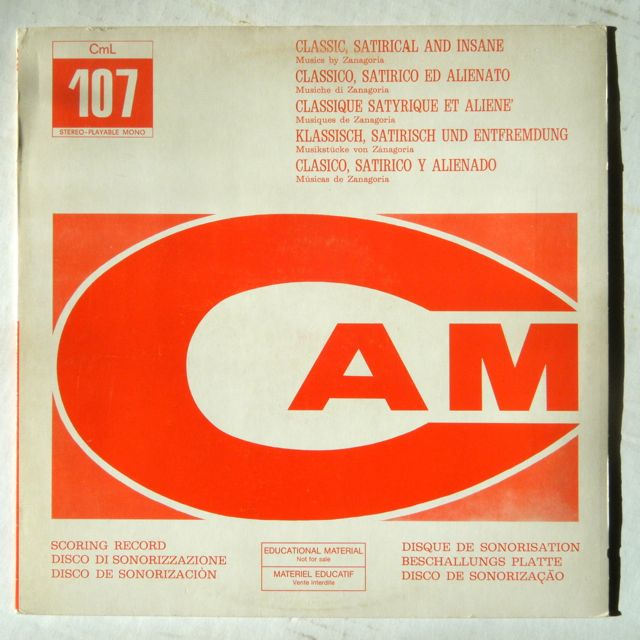 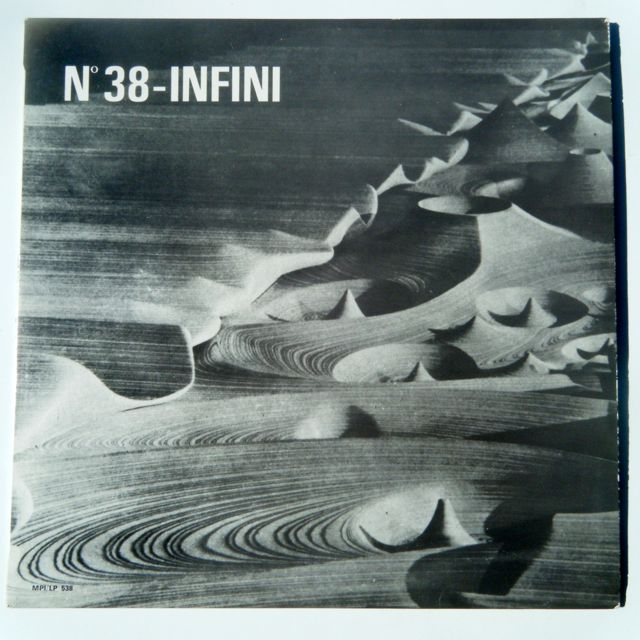 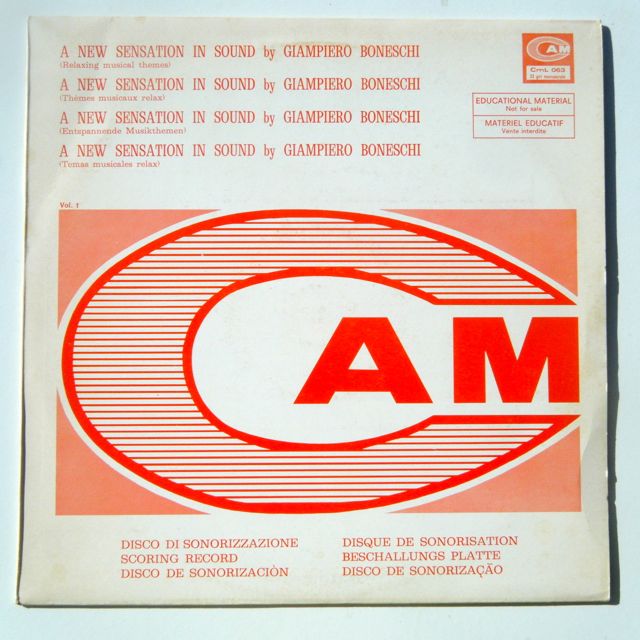 Original Italian press on Cam.
Rare electronic / avant garde library by Boneschi, listen to the hypnotic and trippy track, "Soul Beat"!!!
record has one marks that makes some light click during the intro of the 1st track, side B, not the best track. Otherwise, in excellent condition!! 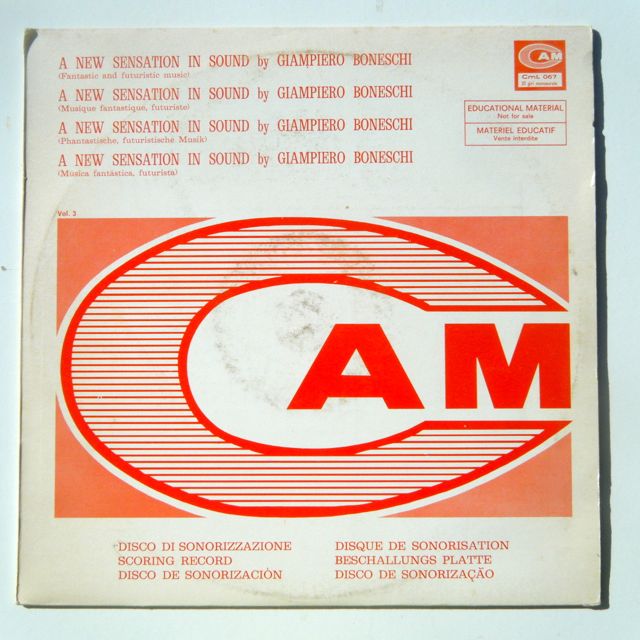 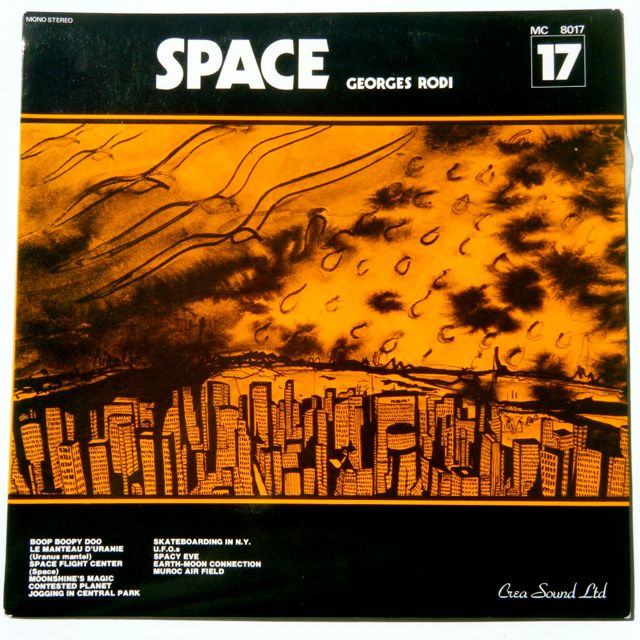 Creative electronic library composed by Georges Rodi released in 1979.
Listen to some snippets from this great lp.
Record in superb condition, looks unplayed, clean and shiny copy, no marks, lighly warped but it doesn't affect the sound.
Cover has minor wear on the corners, slight hairline marks on the back cover. 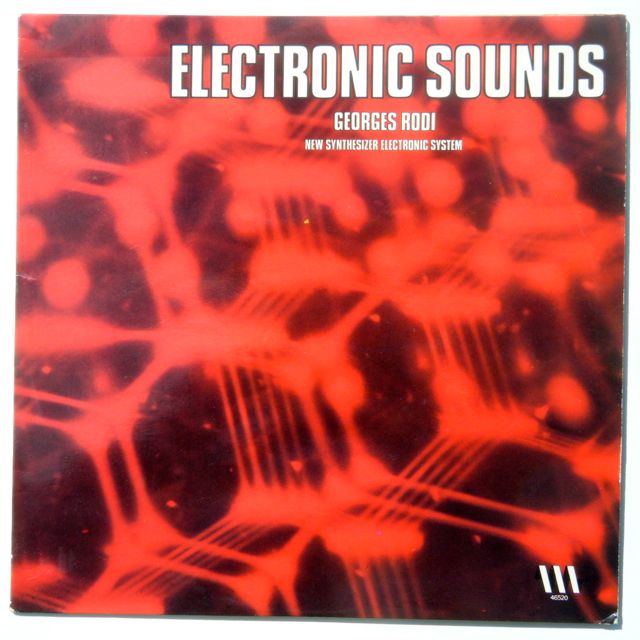 Interesting electronic library by Georges Rodi, record in NM condition, lightly warped but it doesn't affect the sound, plays excellent!! Little tear on the back cover. Solid edges and corners. 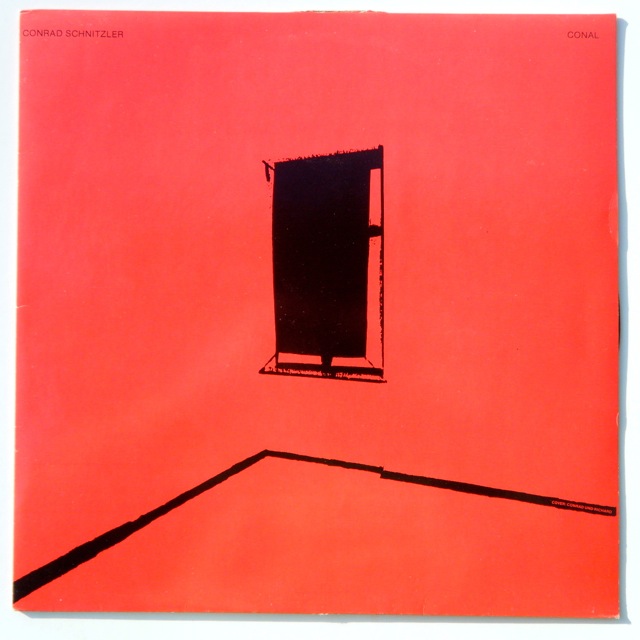 Rare electronic lp released in 1981 by the German Guru Conrad Schnitzler, founder of Kluster, here is just two sides with long progressive bleeping sub marine sequences, check the soundclip.
I have found just one superficial mark, a clean and shiny copy!!!
The cover shows a tear on the upper edge, otherwise in excellent condition!!! 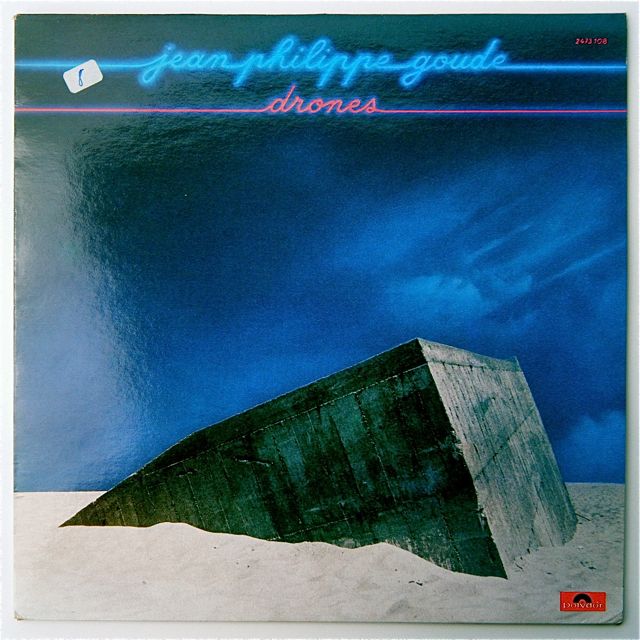 Superb electronic / prog jazz fusion lp composed by Jean Philippe Goude in 1980. Listen to some magic electronic moments of this album.
Shiny and clean copy, one little sticker on the front cover. 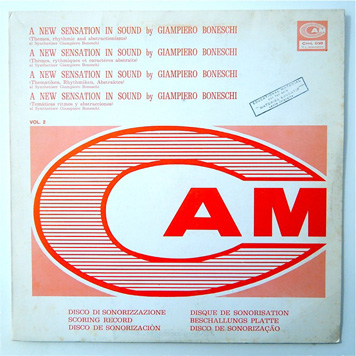 Scarce electronic library from the famous serie, " A New Sensation In sound" composed by Giampiero Boneshi.
Great loungy avant garde electronic music performance including plenty of different patterns, listen to the soundclip.
The record has some superficial hairline marks and light paper marks, it plays excellent!!
The cover shows some stains, a little stamp on the front cover, solid edges and corners!!
It comes with the original printed inner sleeve. 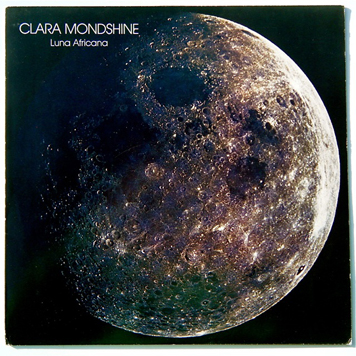 Original German issue released in 1981, the most obscure album on Innovative Communication.
Brilliant electronic / experimental lp by Clara Mondshine including cosmic ambient touch and avant garde hypnotic electro patterns, listen to the soundclip.
The record is NM, just one superficial paper mark, it plays perfect!!
The cover shows a light wear on the edges and corner, a beautifull copy!! 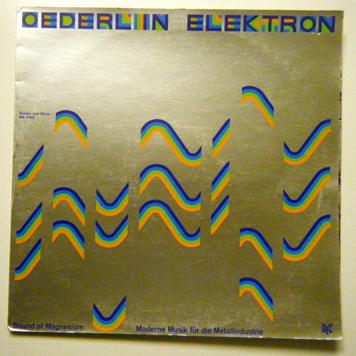 Mega rare Swiss private press released in 1972 by the Oederlin Elektron Company. A Swiss friend told me this lp was pressed only in 200 copies.
Bruno spoerri delivers here a superb concrete / avant garde performance including tape manipulation, sequenced analog synthesizer, probably an ARP 2600. He plays also the saxophone. This is a one sided lp, the second side has the company logo stamped on.
Magnificient object with a beautiful graphism, high quality screen printing, gatefold sleeve and unusal record pressing and label, check the pictures.
The record is in VG++ condition, just some light marks but they don't affect the sound.
The cover shows a light wear of the corners and edges, nothing serious. 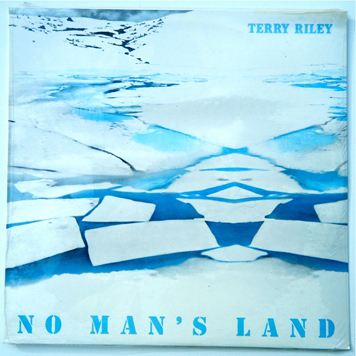 Original Swiss press released in 1984.
"No Man's Land" is a little known indy Swiss movie directed by Alain Tanner. Terry Riley plays the piano and the Prophet V synthesizer for this performance and he is helped by Krishna Bhatt on sitar and tabla.
Deadstock copy, still sealed, the cover is in perfect condtion. 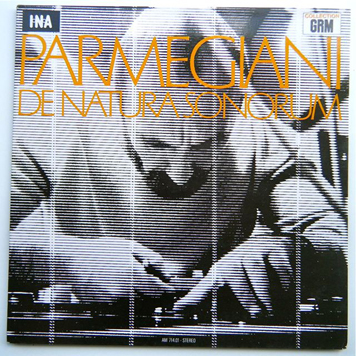 Original French pressing released in 1975.
"De natura sonorum" is a main piece and a turning point in the Parmegiani's work. The sound texture changes, more sleek, sober, minimal, and he uses less sounds simultaneously. This lp is essential for me, very creative, and by the way fresh and new!!!!
The record shows some light marks, no scuff, and plays fine. Check the soundclip!!!
The cover is in solid shape with just some minor wears. Beautiful gatefold sleeve, with insert. There is a little stamp inside the gatefold sleeve, a stamp from a nursery school, and they used this Parmegiani's lp to awake childrens, cool, isn't it??!!